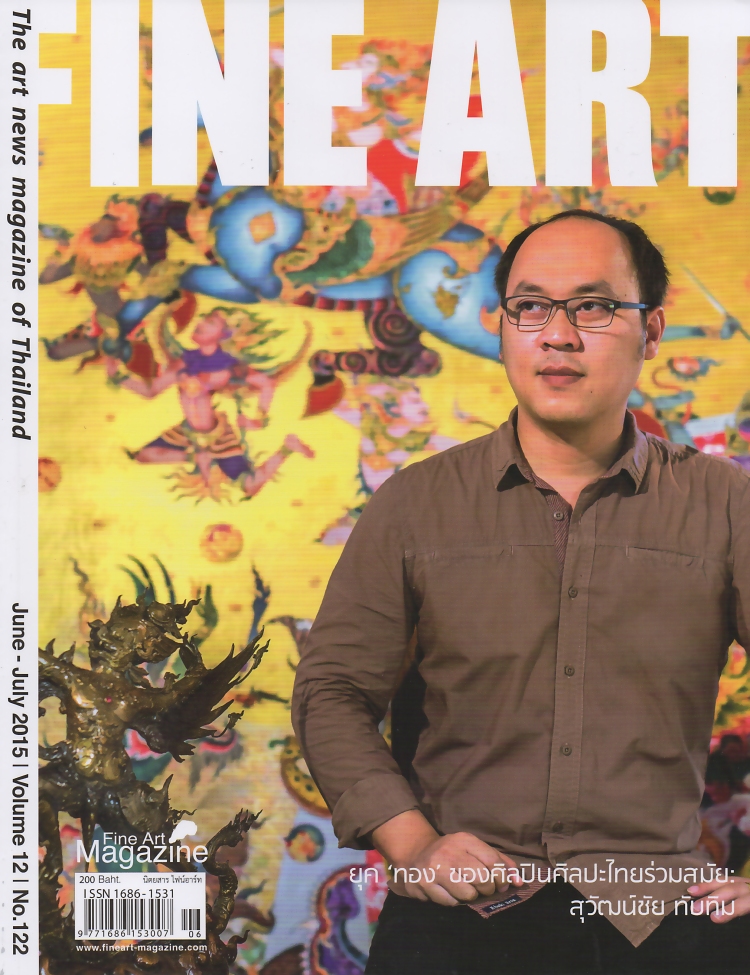 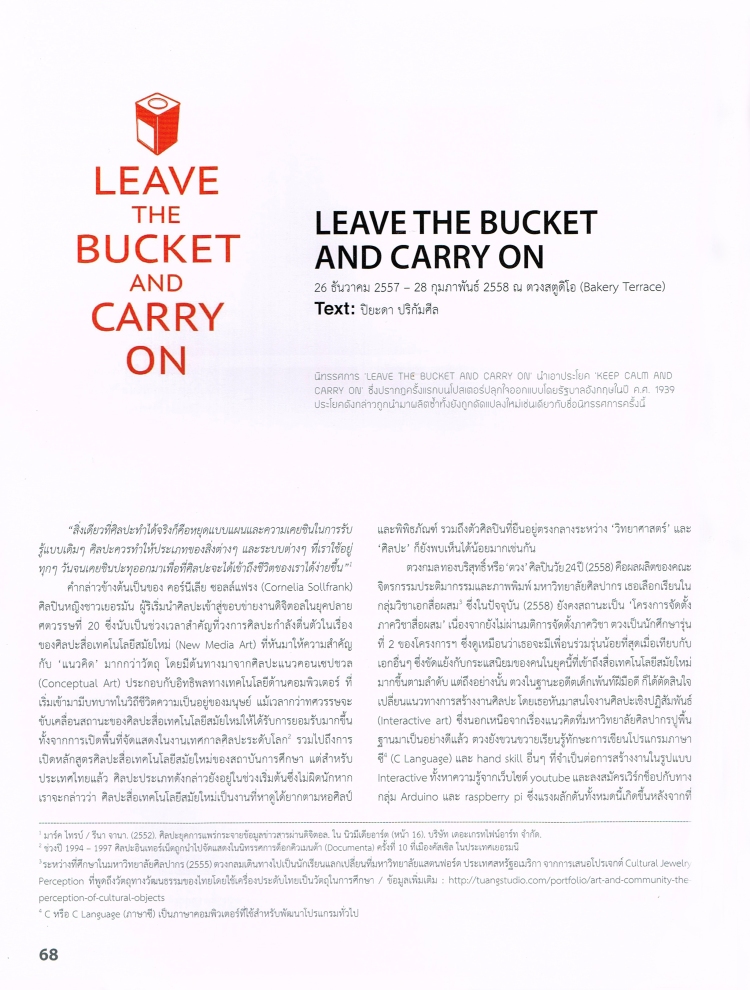 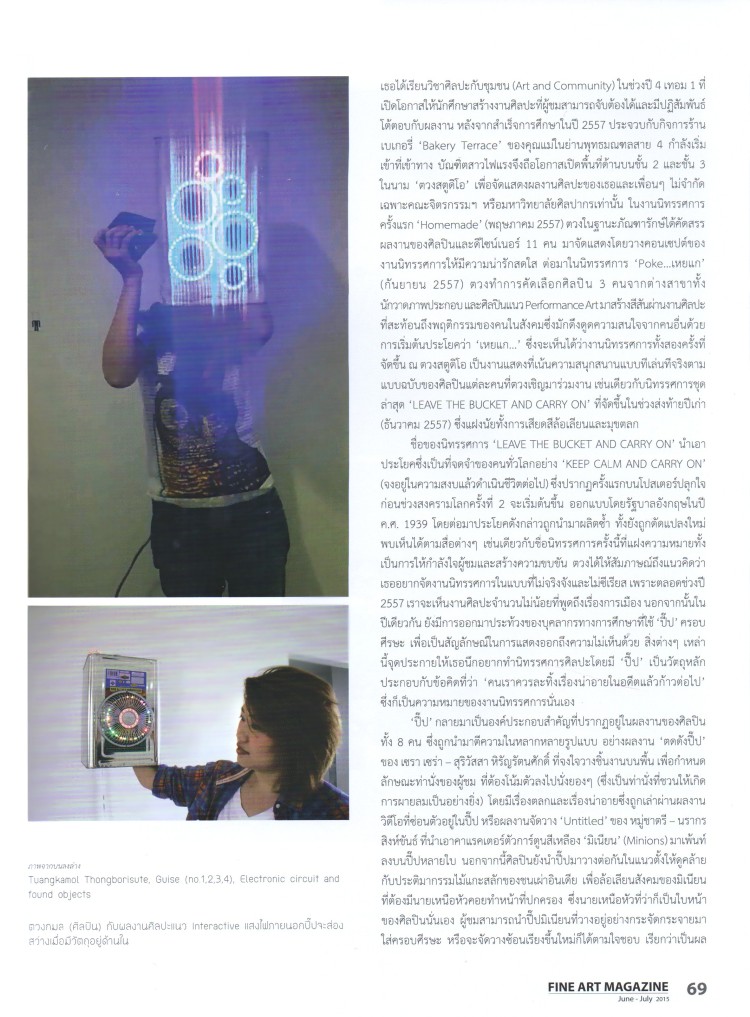 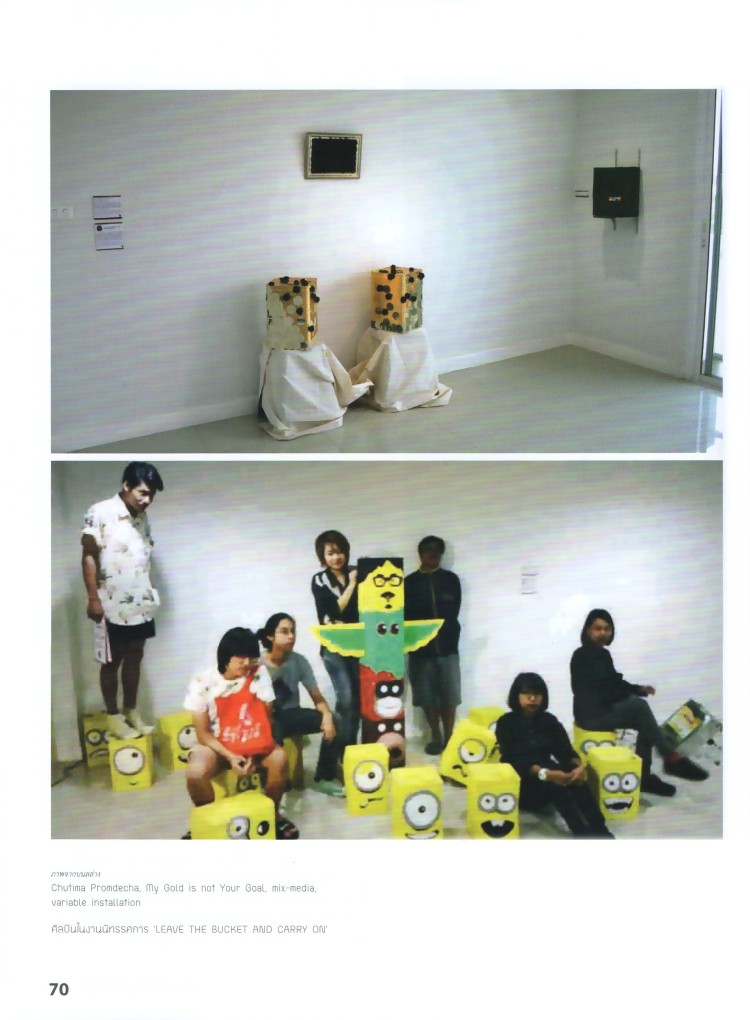 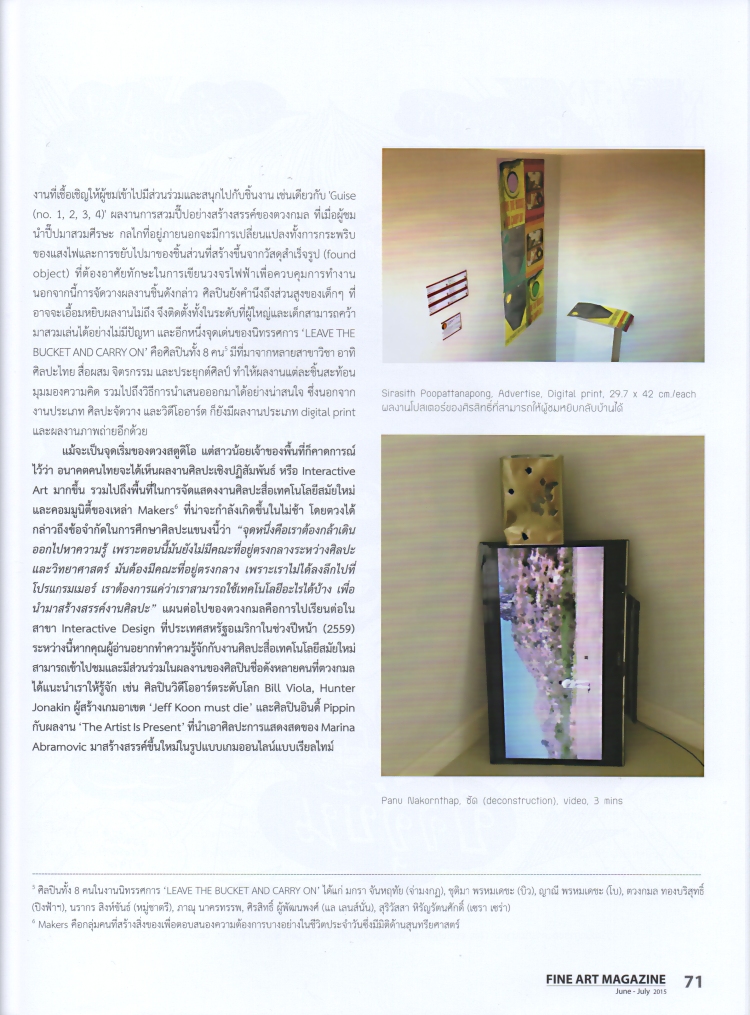 Leave the Bucket and Carry On

The exhibition, Leave the Bucket and Carry On, plays on the injunction ‘Keep Calm and Carry On’ from a  motivational poster created in 1939 by the British government, which has since been used and applied in many different contexts, becoming a well-known slogan in modern popular culture.

“The only thing that art can actually do, is to stop the tradition and familiarity of perception. Art should make the ordinary explode so that art can get into our lives more easily.”

The above quote is by Cornelia Sollfrank, a German feminist artist who was one of a new wave of 20th century artists, incorporating the digital into their artistic practices and founding what has become known as New-Media Art.  In New-Media Art, like Conceptual Art, “concept” is more important than substance, providing an exciting new genre in which to consider the influence of digital technology in our lives. In the past decade, New-Media Art has taken an increasingly important place in national exhibitions and many art institutions have grown up which are dedicated to this new field of study. However, Art education in Thailand has yet to adopt this field into its curriculum. It would not be an exaggeration to say that New-Media Art hard to find in galleries or museums in Thailand. It’s also rare to find an artist here who is really exploring the intersection between art and technology.

Tuangkamol Thongborisute or Tuang is a twenty-four year old artist (2015), who graduated from The School of Fine Art at Silpakorn University. She chose to major in Mixed Media, which at this time is still a “to-be established department” of the school (2015). Tuang is only the second class-year of Mixed Media, the school’s smallest department. Considering how fond Thai people are of their digital gadgets provides a stark contrast to the role the digital plays in art education. However Tuang, who was trained as a classical painter with awards under her belt, chose to turn her interest to interactive art, learning to code by watching YouTube videos and taking Arduino and Raspberry Pi classes outside of her school.

Tuang took a class called Art and Community in her senior year, which gave students the opportunity to get into communities outside the art world and to seek collaboration and participation with these new audiences. The experience inspired Tuang to create an art space which would be appealing to people who are not familiar with the gallery environment. Her art space is located on the upper floors of her family’s restaurant, Bakery Terrace, on Phutthamonthon Sai 4 road. The first exhibition shown was called ‘Homemade’ (May, 2014), and the space has since exhibited the works of eleven young artists and designers. The space aims to act as local art space creating a positive atmosphere for visitors.

In her next exhibition at the space, “เหยแก,” (Poke) (September, 2014) Tuang has invited three female artists whose works come from different artistic disciplines – an illustrator, a performance artist and a painter. The team’s inspiration was an observation of how people  initiate conversation. (*Note from translator* “เหยแก” is an verbal expression with speaking tone, which is incorrect in Thai writing, and does not has any correct translation in English. However, the closet translation is “Hey you.”). We could see that both shows Tuang has curated have displayed artworks with playfulness and jokes.

Similarly, ‘LEAVE THE BUCKET AND CARRY ON” (December, 2014) where the classic motivational quote is rephrased as a message of encouragement and support to the audience in Thailand’s current political situation. Tuang explains that this exhibition was created with the idea to take a serious issue and treat it irreverently, to learn from the mistakes in the past and move on.

Tuang wished to produce this exhibition because the 2014 art scene in Thailand is preoccupied with the disappointment, sadness, and madness of Thailand’s political and education systems. In this year, there was a protest from educational professions who used zinc cans to cover their faces, symbolic of embarrassment, as a statement of their disagreement with education policy. Hence, it brought the idea of using “Peep”, a Thai name for a zinc can or bucket, as a main object for the show to welcome the year 2015.

Eight artists received multiple zinc buckets to experiment with and produce artworks for the exhibition. The final works were created from different perspectives and interpretations of what embarrassments should be left behind. For example, the “Peep Fart” by Sera Sera –Suriwassa Hirunyarattanasak, a work placed on the floor, forcing the viewer to bend forwards so they appear to be farting. Inside the piece, Sera Sera installed a tiny video piece about her funny memories.

“Untitled” by Mhoochatri — Narakorn Singkhan, is a collection of peeps of minion characters that hides a message about the problematic ‘leader and follower’ relationship. Viewers can see the show in any order. “Guise (no. 1, 2, 3, 4)” is a collection of peeps with customized electronic attachments, created by Tuang, that allows people to put their heads inside the pieces, as though they are wearing a mascot’s head. When the person’s head is inside, parts of the piece will start to move, while others can be activated with different physical interactions. Guise is created with found objects and is a removable installation that can be enjoyed by viewers of different heights, such as children.

Another great aspect of this exhibition are the differences in the artists’ educational backgrounds, including Thai art, mix-media, painting, sculpture and applied art. These differences mean the show offers interesting new perspectives from these young artists. Digital prints and photography are also on view.

Although Tuang has just begun her art career, she is sure that with the increasing number of new-media art spaces and maker communities, Thai people will be more familiar with interactive art in the near future. Tuang encourages creative students to learn outside of the classroom and seek knowledge from new disciplines to inform their work. She points to the lack of classes in formal institutions that are up to date with the global art world, and specifically digital technologies. She calls for school to set up their curriculum with interdisciplinary classes between art and science, not more programming classes but more programming classes for artists.

To learn more about New-Media art, it’s a good idea to explore artworks from different genres, for instance, Bill Viola – a world famous video artist, Hunter Jonakin – a game artist who made “Jeff Koon Must Die,” and Pippin — another indy game artist who created “The Artist is Present.” You will soon see art can be in so many different forms!